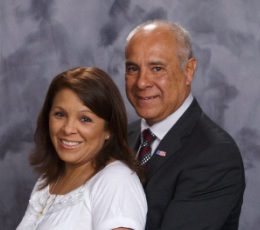 Joe and Debbie Gardner were married in 1989 and have lived in West Covina for over twenty- nine years.

They have sent their kids to local schools and homeschooled their third child. They attend and support Calvary Chapel Chino Hills. Debbie is a homemaker and cares for her grandchildren and family.

Joe is a retired police sergeant from the City of Santa Monica. He served that community for twenty-seven years and retired in December of 2011.  He is an expert on the issues of homelessness and Community Oriented Policing programs and tactics. He has been a street-level peace officer. Joe also implemented and supervised a specialized unit dedicated to solving neighborhood issues caused by homelessness. Joe speaks on the topic to community groups business owners to help mitigate the impact of homelessness. Joe cares for his community and has strived to improve it.

Joe is a volunteer member of community service organizations. He is president of Meals On Wheels, Industry, Inc. Joe oversees the program that delivers tens of thousands of meals each year to residents in need of nine communities in the San Gabriel Valley.

Joe is also a Presiding Commissioner of the Los Angeles County Probation Commission. He was appointed by retired County Supervisor Michael Antonovich. Joe represents the residents of the 5th Supervisorial District under Supervisor Kathryn Barger. His functions include participating in bi-monthly public board meeting and conducts oversight and inspections of juvenile camps and facilities to assure the humane treatment of wards of the County.

He was nominated twice by his party for the State Assembly.

Are you registered to vote?